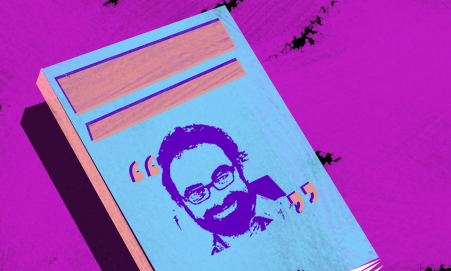 There is an immutable law of Internet journalism that no article you write will be as appreciated as a goofy Tumblr created in a moment of idleness. (I’m sure Jeff Jarvis has a name for this.) That has been the case for me since earlier this year, when I started a Tumblr to catalogue all of the blurbs of author Gary Shteyngart, whose “promiscuous praise”—among today’s writers, he might be the most prolific blurber—had become something of a modern legend. Other writers might give me a small compliment for some review I’ve written, but upon hearing that I’m the proprietor of “The Collected Blurbs of Gary Shteyngart” and that I’ve made it a mission to catalog all of the outbursts of praise from an inveterate praise artist—well, that’s when my acquaintances nod their heads before politely excusing themselves.

Let us now praise the praiser. Over the years, Shteyngart has been interviewed about his blurbing compulsion, and his answers reflect his monkish devotion to the craft. Recently he talked to A.J. Jacobs, another compulsive blurber, about the habit for the New York Times, explaining how he decides to blurb a book: “I look for the following: Two covers, one spine, at least 40 pages, ISBN number, title, author’s name. Once those conditions are satisfied, I blurb. And I blurb hard.”

Indeed! And so I will testify, to you, reader, who accidentally clicked on this column. For I’ve gone deep into the Amazonian forests and gathered, like so many plump berries, 61 Shteyngart blurbs, though some of those were submitted by readers and others are evanescent things, unable to be pinned to a book cover, such as one about A.J. Jacobs’ Times article. There are still rarer, more delicate objects in my collection—Faberge blurbs—including a blurb about a tweet: “Simon montefiore has written a classic tweet that will endure for hours.” Aye, perhaps, but the record of that praise will now live on forever (or until Tumblr runs through its venture capital).

And however vain it might be, the most precious blurb under my stewardship is one that Shteyngart, who reportedly only writes fiction to support his menagerie of dachshunds (if he had his druthers, I’m told, he would do nothing but blurb, blurbing deep into the night), wrote upon my request. It is a blurb for the blurber, a blurber’s blurb, and I’ve positioned it, as one would a Picasso in the foyer, at the top of the site. It reads in full: “Gary Shteyngart’s blurbs are touching, funny and true. This is a blurber to watch.”

What makes a Gary Shteyngart blurb? First, it is in English. (This is no small matter, for Gary, nee Igor, was born in the Soviet Union and counts Russian as his mother tongue.) Second, it has words, usually complimentary words, many of them adjectives. There are periods and, sometimes, a wittily placed exclamation mark. Occasionally he allows a metaphor, catlike, to slink in. And surrounding all this: two quotation marks, staring fondly at each other across the expanse of neon prose.

Some people have told me that blurbs are meaningless, that they have long been despised as a low and disingenuous part of the book marketing machine. They are favors traded between writers; they are small kindnesses reluctantly given; they are a trick that agents, when they are resting their voices from screaming at their assistants, force their writers to perform. Others say that no one pays attention to blurbs or that, if they do, they are fools, seduced by puffery that probably originated in an infomercial testimonial for a food dehydrator.

But I think that blurbs are more than that—or at least that Gary Shteyngart’s, numinous and numerous, are. Sure, I have read and typed this word (“blurb”; bluuuuurb) enough times so that it no longer appears like language to me. Yes, I have spent so much time scouring book catalogs and googling “Gary Shteyngart blurb” (and, in more desperate moments, “Gary Shteyngart blurbs”) that I have lost all sight of where I came from, so that I now stand on some distant precipice, surrounded by a roiling sea of Tumblr tags, under a vaulted sky of reblogs and heart icons that, if only I stretched far enough, I think I could somehow click.

Yet on the way towards this place, I have seen things. I have seen the difference between “a brilliant, funny, humane writer” (Sayed Kashua) and a “highly entertaining debut novel” (George Hagen’s The Laments). More importantly, I believe—though we have only exchanged a few (masterful! irreverent! genre-bending!) tweets—that I have seen into the heart of Gary Shteyngart himself. Like Hunter S. Thompson, who retyped The Great Gatsby and A Farewell to Arms to know what it was like to write a great novel, I have done the same with The Collected Blurbs of Gary Shteyngart. Fine, I have only cut and pasted them into Tumblr between games of Starcraft II, but in this age of brevity, that must count for something near the same.

And when Gary Shteyngart decides to hang up that well-thumbed thesaurus, I will be there, asking him, Why? Were we not good enough? Do we, do they, those undersung MFA graduates, no longer deserve your praise? And I am sure that he will turn to me and—with great delicacy and prefaced by several improvised flattering remarks—ask why I have violated the court order that is surely in my future.

Jewcy Has a Tumblr!