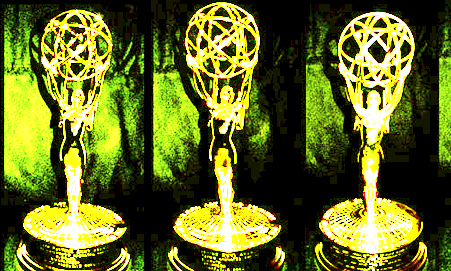 This Sunday night, the 64th annual Emmy Awards will honor the best in television. Each year a handful of episodes from each of the nominated series are selected to showcase a show’s best work. Since we’re in the business of honoring the best in Jewish television, we present the top five Jewish moments from this year’s Emmy-nominated shows, from Palestinian chicken and Camp Ramah to terrorists and concentration camps.

Larry (Larry David) and Jeff (Jeff Garlin) try a new popular Palestinian chicken place and deem it the perfect place for Jewish men to bring their mistresses since no Jews would ever eat there. (Alan Dershowitz even sent Bibi a copy!)

Saul Berenson (Mandy Patinkin) opens up about his lonely Jewish upbringing to his terrorist suspect passenger while driving back to CIA headquarters, creating an unexpected parallel between their situations.

Unfortunately a YouTube clip doesn’t exist (let us know in the comments if you find one!), but the entire episode is available on iTunes—the scene starts at the 37-minute mark.

Butcher Manny Horvitz hides out in the basement of a synagogue as he nostalgically remembers his Ukrainian past and plots out his future.

Copywriter Michael Ginsberg (Ben Feldman), explicitly hired to appease Jewish client Manischewitz, reveals that he was born in a concentration camp, turning a punch line about the token Jew into a far more serious self-reflective matter that haunts the office.

Again, there’s no YouTube clip available, but the entire episode is on iTunes—the scene starts at the 12 minute mark.

The excitable Shoshanna runs into an old friend who remembers her best from a raid she led during their days together at Camp Ramah.

Air Date: May 6, 2012
Choice Line: “You led the most intense kitchen raid I ever saw in my time as a junior counselor.”

Have another favorite Jewish scene from this year? Let us know in the comments!