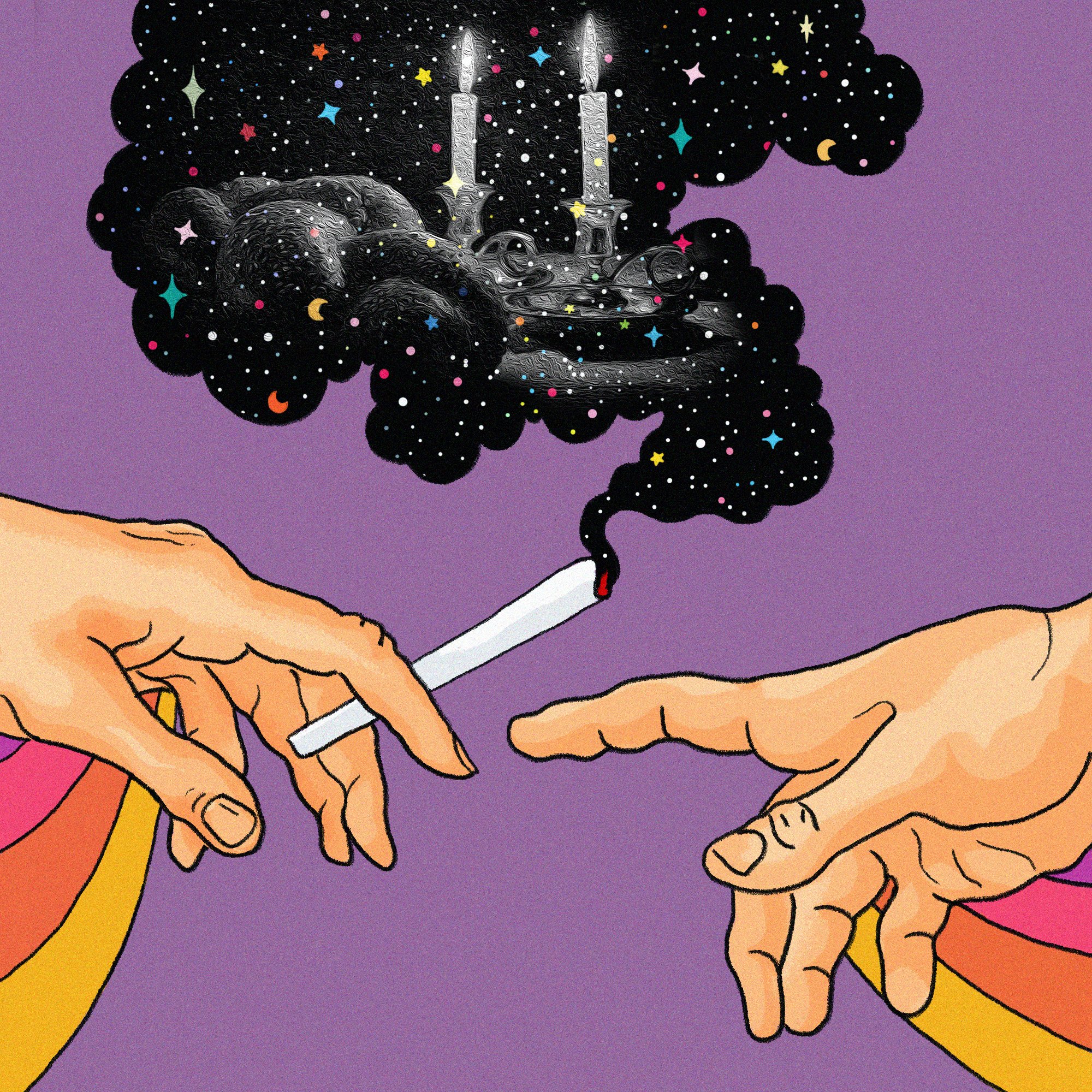 Over the last year of medical house arrest, I fantasized constantly about Shabbat dinners. Alone in my apartment, every Friday for months, waiting for the pandemic to end, for the day I could return to good company, good food, and good wine. I looked at myself in the mirror and rehearsed raucous laughter, tried on outfits, made kiddush and flipped through magazines until my edible kicked in and carried me to sleep.

I thought about mine.

What do people on this list have in common? Atypical, sometimes controversial ties to Jewishness and media. They often make people uncomfortable. I assume they’re excellent conversationalists.

I just think that if somebody tells me I shouldn’t like something, or if I shouldn’t read something, I’m going to want to try it. I love drama, I love controversy, and I love interesting conversation. There is nothing worse than being in a group of people signalling their shared values to each other for hours – I’m not a university student, I don’t need to filter for sensibilities at my dinner table.

I want to get litty and I want to gather. I present my dream blunt rotation: Shabbat dinner edition.

The year 212 came out was the most pivotal era of my life, when I felt like the main character all the time. She lifted me into consciousness like Pharoah’s daughter lifting the baby Moshe Rabenu from the Nile. The synthy beat and aggressive lyrics have the ability to transport me to freshman pub crawls, dance floors, and house parties in crusty living rooms.

Azealia takes hold of the media in moments of controversy – in the most ephemeral, clickbaity sense. Journalists don’t seem to know what to make of her, and her apologists rarely manifest outside stan Twitter.

When, in February of 2021, the artist declared, “I’m Jewish now,” in the caption of a now-deleted Instagram post, Jewish thought leaders and the crusty Twitterati alike decried her as “problematic,” opining that it was antisemitic of her to declare herself Jewish without deferring to the proper channels. What followed was a moment of “backlash” that Insider helpfully qualified as not “the first time Banks has caused a stir with her social-media presence.”

But did anybody think to invite her to Friday night dinner?

If there’s anything Banks has demonstrated during her career, is that’s being labelled problematic means basically nothing if you use it too many times. Do we start with the homophobia, or ask about the chicken blood in her closet? The cat bones? Her feud with Grimes?

And for that, I’m extending an invitation.

If I knew Ivanka personally I would text her and say, “Hey Vanky, Friday night chez moi?” And she’d reply something like, “Yes bitch!” and I’d seat her husband next to my boyfriend so they can distract each other.

Ivanka’s Judaism is fascinating to me. I wish she talked about it more, but it’s understandable that she doesn’t. If I were her, I’d be mum on the details too. Still, I wonder: What does she think when she leafs through the pages of her siddur? Does she pray sincerely?

Politics are verboten at my Shabbos table unless I feel like talking about them. But as a Canadian held hostage by American media for my entire life, I don’t ever want to hear what people think about the last president of the United States ever again. I want to hear Ivanka talk about Karlie Kloss and true crime. I want to ask her about who she follows on Instagram – what does she think of Leandra Medine Cohen, David Portnoy, and Billie Eilish? How plugged into the pop culture zeitgeist is she?

In a searing Vanity Fair essay, her ex-best friend writes, “[it] is nearly impossible to ignore when the person who used to pluck ingrown hairs from your bikini line suddenly appoints herself to the role of unelected public official and begins to torch democracy.” She makes a good point: It’s hard to be neutral when talking about a Trump – especially when you have such high expectations.

But I can also attest that I come from no such vantage point, and the extension of my invitation to dinner would be on entirely neutral political lines. And for the record, I bet she and Karlie text all day long.

I’ve never actually watched the Real Housewives of New York, but I’ve followed Leah McSweeney on Instagram for years. I didn’t even realize she was a Housewife – she seems so chill. She has good taste. She cavorts with the likes of Azealia Banks, Hari Nef and Cat Marnell on Instagram, swims nude in a grey lake, and poses in camo pants and heels against brick walls. In another photo, she’s tuning in virtually to a Shabbat dinner that was aired on the show.

McSweeney chose to document parts of her conversion to Orthodox Judaism on the series. Her sincerity is moving: She could approach this glibly, but she doesn’t. She genuinely wants to learn.

Of course, what’s shown on screen and what she actually experiences are totally different. She is currently undergoing a profound transition, and her audience is reconciling that with a public image that doesn’t fit squarely into a box.

“It’s so nerve-wracking. You know, Dave Chapelle likes to say that he never talks about being Muslim in public, because he thinks his religion is so beautiful he doesn’t want to be a stain on it because of whatever he does. Filming The Real Housewives of New York and talking about it made me feel so anxious. I didn’t want to look exploitative. And I was worried, because I have such an immense respect for all religion but obviously especially for Judaism. And I wanted to get words of encouragement and welcome, but I was also very worried about being judged.”

The critiques from viewers come in – why is she using her phone on Yom Kippur? Why is she live streaming a Shabbat dinner if she’s trying to be Orthodox?

Nellie Bowles, who writes Chosen By Choice, describes the embarrassment that comes with wading into Judaism, writing, “there are times you’re going to mess it up or feel like there are too many rules to ever learn in one life, and that’s (I hope? I think?) normal. ” Imagine how McSweeney feels, having her observance picked apart. My hope for her is that she ignores the naysayers and settles into observance when she’s ready.

I’d seat her beside Azealia because they absolutely know each other.

Where McSweeney’s approach to Judaism can be described as “thoughtful”, Trisha’s has long been tinged with the P-word (pr*blematic). Their OOTD for last year’s Rosh Hashanah was an IDF t-shirt and a beret. They slathered an apple with honey and resolved for a “sweet, sweet lovin’ and a sweet, sweet ass” for 5781. The Jews were not pleased.

Scaachi Koul wrote in her profile on Trisha, “I’ve been watching Paytas since I was 16, and even when they faltered, I believed in their redemption.” But by the time the piece was published, Trisha had turned on Koul, saying, “You disgusting little rat. You should not get to talk to another human being as long as you live. You are the bottom of the barrel scum pig of the universe.”

I, too, want to believe in their redemption. Without extending too much judgement, I’m both horrified and fascinated by her relationship to Judaism. On one hand, she’s very publicly wrong about everything she says and does – on the other, it’s surreal to see her embrace Judaism before such a captive audience. Are they genuinely invested, is it because of their husband, or do they do it because they revel in the negative reactions? Ever the elusive influencer, it’s hard to say, and probably not helpful to speculate.

Ironically, by the time the piece was published, Trisha had turned on Koul, telling her, “You disgusting little rat. You should not get to talk to another human being as long as you live. You are the bottom of the barrel scum pig of the universe.”

Harsh, babes! I think they’d add a lot of dimension to the crowd, although I’d probably sit a little far away.

I feel the same way about Gwyneth Paltrow that a lot of my friends feel about the Lubavitcher Rebbe: Publicly polite reverence, privately fanatical. Her critics say she’s out of touch. At worst, she’s dangerous – we have yet to study the long-term effects of our jade eggs, although mine hasn’t fallen out yet.

I don’t know if I want to be her or be near her. When she admitted in her cookbook It’s All Easy to “[settling] for pasta with butter and cheese,” I allowed myself to also settle for pasta with butter and cheese for years. Every time I put on a thoughtful cashmere sweater and white sneakers, I ask my boyfriend if I’m giving off Goop vibes. Gwyneth is probably the only famous person I would actually be stunned to meet.

As a patrilineal Jew and possible covert convert (the jury’s still out on what happened there), Gwyneth has undoubtedly been present for some sick Shabbat dinners. Perhaps she’s hosted a few. I make her slow cooker brisket recipe every year for Yom Tov. I’d probably serve that and say, “GP, do you recognize this?!” and then cry.

In 2017, journalist Mattie Kahn wrote about trendy, Instagrammable initiatives that tied Jewish traditions like Shabbat dinners to meditation and wellness:

“Revived in an era of wellness retreats and digital detoxes, ancient Jewish rituals like Shabbat and Rosh Chodesh celebrations have found a sudden resonance unattached from the strictures of the tradition that invented them. Whether the rabbis like it or not, they’ve been Goop-ed.”

I want to be the patron saint of blonde women in cashmere sweater sets, a dream I’ve realized thanks to GP. In her honour, I’d microdose psilocybin by sprinkling it into the hors d’oeuvres. I’m sure it would liven the evening.

Here’s what I hope would happen: Gwyneth might confess to watching Trisha’s mukbangs. Leah and Ivanka would play Jewish geography – do they both know Rabbi Lookstein? Ivanka would admit that she listens to 212 every morning on the elliptical. Does she also read Tablet for Liel? Would Azealia light up the room with her opinions or her outfit?

As life returns to normal, with or without c*vid, and people are getting together again, I want to be challenged and to think about this world differently. I want to know what people are really thinking. There’s no better place than the dinner table, between healthy pours of wine and candlelight, where conversation can flow freely, and we can laugh and gather again.

Jesse Martin-Miller is a Canadian writer and blogger who lives for Friday night dinner.