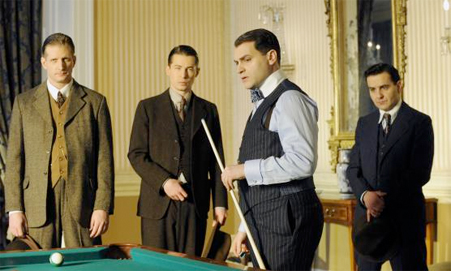 Television writers face a quandary when writing historical fiction. References to famous historical events can seem quaint or like a substitute for originality. Downton Abbey especially relies on historical tragedies to set its plot in motion: the show begins with the sinking of the Titanic and continues, in the second season, with World War I and the 1918 flu pandemic. Nearly any show set in England in this period should acknowledge these events, but when is it a narrative necessary, and when is it a crutch? And when are scriptwriters just trying to make their audiences feel smart for recognizing historical Easter eggs?

I’ve been thinking about these questions while watching Boardwalk Empire, HBO’s crime drama about bootleggers, gangsters, and corrupt politicians, centered in 1920s Atlantic City. (Season 3 of the show premieres September 16.) A friend recently suggested to me that TV writers might lean heavily on history in order to make viewers feel intellectually engaged while they sit glued to their flatscreens. But there are times when historical verisimilitude can be unsettling. When the Jews of Boardwalk Empire are called Christ killers and other epithets, do we call it a nod to historical accuracy, or is it something more pernicious, a way of vicariously enjoying bygone racism?

I haven’t found tidy answers to these questions, but I’ve enjoyed watching the Jews of Boardwalk blast their away across the screen, even as I sometimes wince at their hackneyed Yiddish accents. Jewish gangsters were big machers in the bootlegging era, and chief among them in the HBO series is Arnold Rothstein, who was also known for fixing the 1919 World Series. Michael Stuhlberg—who starred as the sad sack Larry Gopnik in the Coen brothers’ A Serious Man—plays Arnold Rothstein as a courtly but dangerous powerbroker, an inveterate gambler but a deeply cerebral and successful one, with a sociopath’s dead-eyed smile.

His deputies are Lucky Luciano and Meyer Lansky, the latter played by Anatol Yusef. The real-life Lansky didn’t even crack five feet, and his HBO incarnation isn’t much taller. Yusef’s Lansky is streetwise and good at talking himself out of squirrely situations, but his voice—all rounded vowels and Yiddish street theater, it overflows with “oy veys”—can grate. It’s a sign of how parody can come to replace the real thing. A linguist might be able to rate Yusef’s accuracy, but otherwise, he resembles the ye olde New York accents we all take on when imitating our elderly grandparents.

For a study in contrasts in Jewish power, you couldn’t ask for a better pair than Agent Eric Sebso and Manny Horvitz. Played by William Forsythe (whose accent is of the fresh-off-the-boat variety), Horvitz is a burly, silver-eyed butcher who, after surviving a shotgun blast from a would-be assassin, kills the intruder with a cleaver to the skull. Forsythe carries himself with tremendous physicality; he has that heft that could conceal a pack of hard-earned muscle or just the residue of too many years feasting on brisket. He reminded me of Flannery O’Connor’s description of a diner owner in A Good Man Is Hard to Find: his belly looks “like a sack of meal swaying under his shirt.”

By the end of Season 2, Horvitz has thrown his lot in with Nucky Thompson, the show’s main protagonist and anti-hero, played by Steve Buscemi. I couldn’t tell you quite how Horvitz got to that position, as Boardwalk Empire is so filled with deals and counter-deals, many of them never consummated, that it’s often difficult to tell who owes whom money and who wants whom dead. The show is, frankly, a bit of a mess, with a couple dozen characters forming a spiderweb of relationships. But Boardwalk Empire is also like Horvitz: brash, violent, often witty and menacing, and steeped in an old-world charm.

Pour out some Manischewitz for Agent Sebso, who never really stood a chance in this rogues’ gallery. Sebso (Erik Weiner) is a government agent charged with enforcing prohibition in Atlantic County. He’s partnered with Agent Nelson Van Alden, a fanatically religious Christian whose profound discomfort with Atlantic City (“Sodom by the sea”) leads actor Michael Shannon to new frontiers in bitter beer face. Sebso isn’t so clean himself—he’s secretly on Nucky Thompson’s payroll and kills a witness on his orders—but his default mode is simpering and pathetic.

In the penultimate episode of Season 1, after Van Alden has begun to cast doubts about Sebso’s role in the death of the witness, Sebso asks how he might regain his partner’s trust. “Repent,” Van Alden replies, leaving the Jewish Sebso baffled. Later, the two are investigating a still in the woods, where they stumble upon a black church group conducting baptismal rites in the river. Filled with fundamentalist fury, Van Alden repeatedly dunks Sebso in the river, demanding that he repent. One dunking goes on for too long and Sebso drowns. Van Alden is shaken but convinced that he’s committed a godly act.

This is one of the most extraordinary scenes Boardwalk has produced. It works so well, in part, because the show’s frequent displays of violence tend to be so bloody, the camera focusing on a slit throat gushing blood or showing us each pounding as a man’s face collapses in on itself. Here the death is visceral but not exploitative, atavistic without being pornographic in its bloodlust. Instead, Agent Sebso’s death reveals the show’s deep religiosity. For all of its characters’ waxing about loyalty and building criminal empires, Boardwalk Empire is, at heart, about faith versus reason, puritanism versus individual freedom. Agent Sebso dies, in a sense, because he is Jewish—he literally can’t repent, he is beyond baptism—but also because his corruption is too simple, making him a natural sacrificial lamb. He doesn’t have the loquacious swagger of Meyer Lansky, the debonair menace of Arnold Rothstein, or the brutish presence of Manny Horvitz. In a show obsessed with re-enacting out America’s sordid history, Sebso is only a footnote.