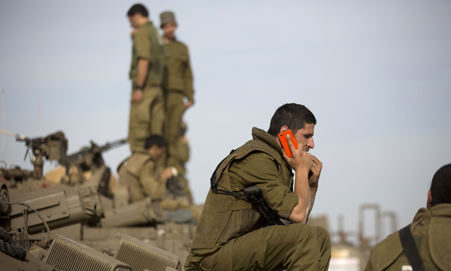 War has always been something of a spectator affair, if not downright voyeuristic. On July 21, 1861, during the First Battle of Bull Run, some well-to-do Washingtonians brought their families to picnic near the battle site, anticipating a Union rout of Confederate forces. The battle turned calamitous, and the picnickers were forced to flee, along with the Union army.

During the Civil War, the invention of photography created a sense of immediacy previously unseen in war. Ordinary civilians were offered a vivid record of what war was like and the devastation it wrought. From then onwards, each new technological development—the telegraph, wireless radio, television, satellite broadcasting, the Internet—expanded the range, speed, and quality of media accounts of war. By the first Gulf War, Americans could watch a battle thousands of miles away unfold in real-time.

The latest, ongoing conflict between Israel and Hamas isn’t marking a revolutionary shift in media coverage of war, but it certainly feels like an important iteration, bringing outsiders closer than they’ve ever been—perhaps closer than they’d like to be—to a war zone. Much digital ink has been spilled in recent days about the ways in which Israel and Hamas are using social media, although recent antagonists elsewhere, such as the ISAF and the Taliban, as well as al-Shabab and the Kenyan government, have done verbal battle over Twitter and used social networks to disseminate propaganda. Israel, with its dedicated social media team and use of gamification on its IDF blog, has only refined and amplified recent practices.

No, what I think is truly new here is how Twitter and other forms of social media—along with the heavy use of cell phone video and the fact that Gaza is one of the most densely populated and most heavily reported on places in the world—have brought outsiders to the veritable limit of spectatorship. Now you can not only see Anderson Cooper react to a bomb exploding behind him; you can read tweets and see photos as soon as the event happens—perhaps, with a network’s broadcast delay, even before it happens. In fact, the IDF may be the one doing the tweeting, providing video footage from the drone that fired the missile. In sum: there is little, if any, meaningful lag between the event and our ability to witness it.

Arguably this shift began during the Arab Spring, but even then the events were unfolding on a longer timeline and across larger geographic areas, with far less smartphone and media penetration. And there are other notable iterative changes in the coverage of this conflict. The BBC’s Jon Donnison, reporting from Gaza, has taken to using the service Soundcloud to post brief recordings of anything from Hamas militants firing a rocket to the sound of an Israeli missile hitting a building. This practice only heightens the sense of immediacy, granting a kind of multi-mediated, vicarious participation to his Twitter followers. It seems only a matter of time before we’re able to smell the smoke.

Are we now brushing up to the barrier between spectatorship and some form of participation? War journalists, always at risk of becoming too involved in the events around them, are now responding to their critics on Twitter, while they’re still in theater. And consider that the Israeli government asked citizens to stop using social media to broadcast Hamas rocket attacks. The government warned that Hamas could use geotagged tweets or Facebook status updates to refine its targeting. Again, this isn’t an entirely new concern—it’s a kind of updated version of the World War II-era warning that “loose lips sink ships”—but it is once more distinguished by the speed and breadth of its reach.

For those of us not in Israel or Gaza, the question then becomes how much do we want to watch and what our engagement means. Is there a limit to how much firsthand testimony and shaky cell phone footage we can digest? Can we be made to feel like we’re taking sides by sifting through the feeds of Gazans more than those of Israelis? Is retweeting something from an IDF spokesperson a moral act? If you repost a geotagged photo from an Israeli friend, are you an accomplice in their supposed recklessness?

My own dominant feelings are of helplessness and mental fatigue. To log onto Twitter now is to uncork an unending torrent of human misery, confusion, frantic rumor, cynical despair, and hemorrhagic violence. The flow can’t be turned off; it can only be tamped down, assuming you choose to unfollow some people. But to do so seems like an abdication, a way of saying that I can’t tolerate observing someone’s very real suffering.

Amidst all this, there is the usual flow of tweets about U.S. politics, basketball, books, and whatever else usually appears in my feed—Twitter, as always, makes strange bedfellows. The appearance of this more trivial material is a reminder of the inherent solipsism of social media, which allow each of us to overrate his influence, to think that being immediately informed of every development is a good in and of itself. If I don’t retweet the latest news about a potential ceasefire or a rocket landing in Ashkelon, it doesn’t mean it didn’t happen, nor will it affect the course of events. It will still be reported on; it will still be in the newspaper tomorrow. But there is still that feeling of inadequacy that results from being passive in an interactive medium.

In a sense, we’re now all picnickers at Bull Run, our witnessing trending towards voyeurism, perhaps even vicarious longing. We might ask if we should retreat a little bit and regain the healthy perspective of distance.

The Bride, The Wig, The Gram