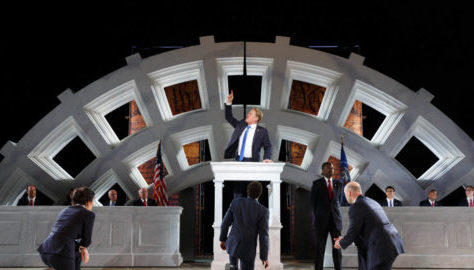 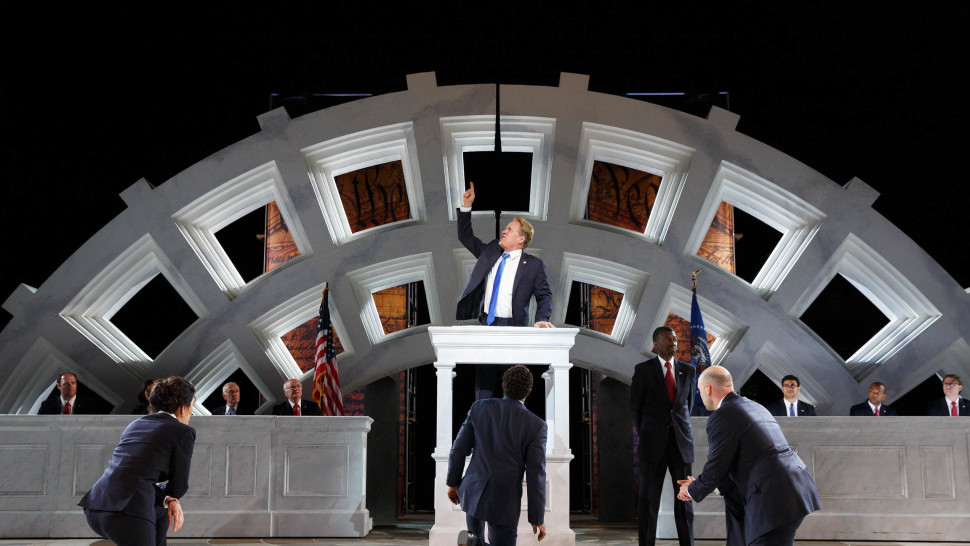 If you make the mistake of reading the news (except for this, of course), you’ve probably seen a lot of articles about a current production of Julius Caesar for Shakespeare in the Park. Basically, the show casts Caesar and Calpurnia respectively, as clear Donald and Melania Trump analogues, complete with crotch-grabbing, naked tweeting, and an updated reference to potential murders on Fifth Avenue. And, spoiler alert, about halfway through the play, Caesar is assassinated, and audiences in Central Park are watching a man who looks and sounds an awful lot like the current president get stabbed to death.

The news of these directorial choices slowly gained traction, and eventually, corporate sponsors pulled their support, turning this play into an ideological battle, generally between those who decry the idea of depicting violence against a sitting leader and those who are fierce freedom of expression defenders, who find the show brilliant. In an opinion piece for The New York Times James Shapiro said that he hopes audiences “will rush to the Delacorte”— and this was after a review that named it a Critics’ Pick. Entertainment Weekly gave it an A. Fareed Zakaria called it a “masterpiece” on Twitter.

…Really? Seriously, why do all the defenders of this production seem to love it so much? It’s an interesting theatrical exercise, but it’s by no means a great production by the standards of the Public Theater. You can believe in the show’s right to do what it did (amen!) but still feel it missed the mark; it doesn’t weaken your argument.

Certainly, Julius Caesar is a play for our times— as Oskar Eustis, the production’s director (and artistic director of the Public Theater), explains it in the Playbill’s notes, it shows us how fragile our democratic institutions really are, and how violence, tempting though it might be, often begets more violence. It’s by no means a celebration of the hypothetical assassination of President Trump, as its detractors assume— it shows just one of many, many ways the transformation of a populist demagogue into a tyrant can lead to chaos. But that didn’t mean the best way to communicate this was to put a Melania Trump impersonator onstage to garner laughs every time she speaks in a vague European accent.

Most importantly, because the last couple of years have been so gosh-darned surreal, truth has become stranger than fiction. The play is one of Shakespeare’s best tragedies largely because there are so many morally nuanced, complicated characters in it. Brutus (a great Corey Stoll, who’s Jewish FYI) loves Caesar as a person, and doesn’t even seem opposed to the general’s policies. He simply fears Caesar’s ambition, and what will happen if one man holds all the power.

Gregg Henry, who’s going to be remembered most for this play, does a great Trump impersonation, knowing when to curb the cartoonishness enough that the assassination feels raw, and ugly, like the murder of a man, rather than of a caricature. But not for one moment are we able to believe that he’s as lovable and noble as the text keeps telling us. Julius Caesar is a recent war hero, beloved by Romans for the glory he’s brought the empire. Making him Donald Trump feels ham-fisted and forced, and since he dies halfway through, it’s like the play starts over with his absence, when the tone is finally allowed to find its own level (that level being very dark).

What most reviews are omitting is that there’s one more suggested analogue— Octavian Augustus to Jared Kushner. Well that can’t be right… Octavian is a speaking role. Well, the production doesn’t run with it; it’s a subtle reference. When Octavian shows up to wage war with his uncle’s killers, he’s wearing a military-style vest over what looks to be a very expensive suit. Sound familiar? Once again, this analogue doesn’t quite work, other than that both men are trusted, younger male relatives of the leaders. Eustis couldn’t resist pointing this out, but it doesn’t add to the production overall.

For what it’s worth, the real-life Julius Caesar had a generally favorable relationship to the Jews, who on the whole supported him during his civil war with Pompey. Jews voted overwhelmingly against Donald Trump. Is that a historical detail that needs to line up to the reality of this play? Of course not. But presenting Trump so literally as Caesar, rather than letting the audience make their own connections to current events, makes the seams show.

Photo by Joan Marcus, via Playbill.